Never Run Out of Cash! A Financial Modelling Workshop with Barry Bisson 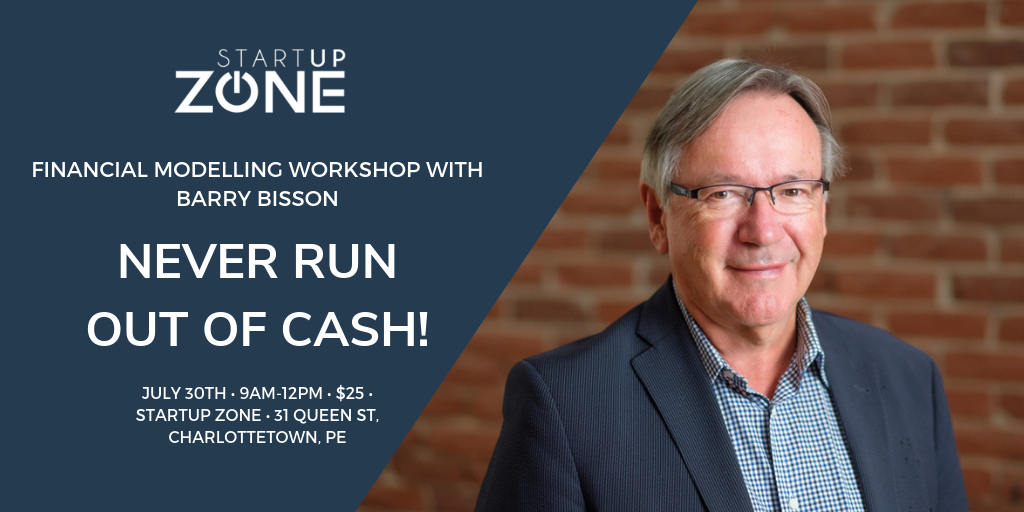 You have a great product/service concept that you want to bring to market and you have given some thought to the business model that will enable you to create a successful startup venture. However, you are uncertain about what financial resources you will need to execute the business model. You are not sure how much capital you will need to raise and when you will need to raise it? You don’t know if your business model will be attractive to investors. Even worse, you are not confident about having discussions of financial matters with bankers or investors.
If this describes your situation and you are keen to improve your knowledge and skills in addressing these important issues, the Startup Zone encourages you to participate in this half-day workshop on July 30, 2019, that will be led by Propel CEO and Startup Zone Board member Barry Bisson.
About the presenter:
Barry Bisson is CEO of Propel ICT, an Atlantic Canada virtual accelerator serving technology startups and companies engaged in corporate innovation.
The early years of his career were spent in the federal public service with Transport Canada in Moncton and Ottawa in various positions related to air transportation operations and policy.
In 1983 Barry joined the Faculty of Engineering at the University of New Brunswick as a Professor of Civil Engineering and Coordinator of the UNB Transportation Group. He served in this capacity until July 1994 when he was appointed the Dr. J. Herbert Smith Chair in Technology Management and Entrepreneurship, a position he held until 2004.
During his academic career, he also had considerable experience in both the private and public sectors as a consultant to numerous corporations and government agencies.
In January 2005 Barry was appointed CEO of Shad Valley International, a national non-profit organization that operates the prestigious SHAD Program at several Canadian universities. The SHAD program challenges Canada’s exceptional high school students to realize their full potential by developing the leadership, creativity, and entrepreneurial skills that are essential for success in the global knowledge-based economy. He was also the first Director of the SHAD program at the University of New Brunswick in 1985 and 1986 and served again as Director from 1998-2004.
Barry retired from SHAD in 2016. He and his wife moved back to Atlantic Canada and reside in Stratford, Prince Edward Island.
He failed at retirement and was appointed CEO of Propel in October 2017, a position that enables him to pursue his life-long passion for innovation and entrepreneurship.
Barry holds BSc and MSc degrees in Civil Engineering from the University of New Brunswick and an MBA from Harvard Business School.
He is a member of the Board of Directors Propel ICT and the Startup Zone in Charlottetown. In 2009 he was named a Fellow of Engineers Canada. In 2013 he was awarded the distinction of Professor Emeritus in the Faculty of Engineering at the University of New Brunswick.